Two white guys grab their guns, hop into a pick up truck and chase down a black man. One jumps out with his shot gun. The black man starts fighting with him and is shot dead. If this sounds like something that took place in the 1950s or ’60s you’d be wrong. It happened two months ago.

The recent killing of an unarmed black man has echoes of Trayvon Martin. This time it is Ahmaud Arbery, 25. His crime is being black in America. That is all you need to know. Nothing else surrounding this matters. Everything else wreaks of privilege and racism.

What you have are two white vigilantes that believed they had a right to be judge, jury and executioner based on the mere suspicion that a black person running through their neighbor could be the same person who was suspected of several break-ins over the previous days. He couldn’t have possibly been out for a run. No, instead, two good old boys grab their guns and hop in their pick-up truck because they are finally going to get the chance to legally kill a black man. And believe me when I say this, they’re probably going to get away with it.

Gregory McMichaels, one of the two killers, said he saw the same suspect the night before (this guy must have super vision through all of the trees in his front yard and no street lights – drop his address from the police report into Google Maps and you’ll see). My suspicion is all black people look alike to McMichaels. They pulled up beside him and told him to stop and that they wanted to talk to him. So, a black man, in America, is being chased by two white people with guns. He doesn’t know them and he is supposed to feel safe in this situation? One jumps out with his shotgun and Mr. Arbery starts fighting with him (that’s what they told the police).

Oh, and McMichaels is a former cop and investigator with the local D.A.’s office. I’m not a gambling man but I’d put my money on… white. He’s getting away with it for sure. The system is stacked in his favor. And just when you thought it couldn’t get worse, the District Attorney in Waycross, GA fired off a letter supporting the McMichaels and arguing that Mr. Arbery had a prior record from several years ago (even though none of that has anything to do with his being killed by an armed posse). He did this right before he had to recuse himself. You’ve gotta protect your own.

Gregory and Travis McMichaels are white and in America that makes them the law. 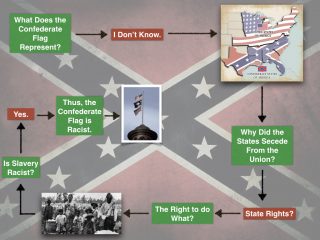 Previous Post (p) Hijacking a Heritage of Hate: The Undeniable Racism of the Confederate Flag