The last month has been incredible for the Joan Trumpauer Mulholland Foundation. We started it off with a meeting with the Salt Lake City School District and they not only want to have the “She Stood for Freedom” Curriculum for all of their 5th graders but asked if they could help create a teachers guide for “The Uncomfortable Truth”. They said, “All of our high school students should be watching this film.”

The next three weeks was filled with traveling to conferences, speaking at schools and shooting a new documentary. Joan and Loki thoroughly enjoyed their opportunity to attend the Georgia Council for the Social Studies Annual Conference in Athens, GA with their education partner, Studies Weekly. Joan was the keynote speaker. Joan and Loki were also able to slip in an assembly at Hilsman Middle School in Athens. After that, Joan and Loki caught up with fellow Freedom Rider, Hank Thomas and then Joan flew to Naples Florida where she visited with another son, Geronimo, and spoke at his school. Loki drove to Jackson, MS with a stop in Montgomery at the Freedom Ride Museum and then in Selma to visit Civil Rights Activist, Joann Blackmon Bland.

In Jackson, Loki, along with Medgar Evers daughter, Reena Evers, visited the Mississippi Department of Archives and History where they brought out the gun used to assassinate Medgar Evers. Next, Loki drove to Tampa, FL where he spoke at the Florida Council for the Social Studies Annual Conference (FCSS) and then did a break-out session titled, “The History of Racism in America and How to Teach it in the Classroom.” FCSS shared that, “The Lunch and Learn was delicious but more significantly informative, engaging, and inspiring. Many participants shared that they learned about resources that they can immediately implement in the classroom. Others shared that the session prompted them to think differently about institutional racism. Loki provided an amazing professional learning opportunity. He expertly balanced complex content and potentially controversial topics.”

Meanwhile, Joan went to West Palm Gardens, FL where she spoke and did a screening of “An Ordinary Hero” at the Weiss School. Steven Hammerman who worked for two years to pull this together said it was the highlight of his professional career.

Joan and Loki then both flew to Utah where they had 11 events in six days including four screenings of “The Uncomfortable Truth”. One of the places we screened the filmed was at Weber State University. Adrienne Andrews, the Chief Diversity Officer, shared her thoughts on the event:

“Weber State University has been proud to work with Loki Mulholland and the JTM Foundation on multiple occasions. Most recently, we hosted Loki on campus to view his new documentary, “The Uncomfortable Truth.” As we began marketing the event, originally scheduled for the morning, community partners and students let us know that the timing did not work for everyone. To this end, Loki worked with us to host two viewings and discussions to meet our needs – one in the morning, the other in the evening. The responses to both events were nothing short of spectacular. Audiences that have trouble reconciling our American past and present were provided with the tools to understand systemic and institutionalized racism we still experience. Less about pointing fingers and placing blame in a current context, the documentary and following discussion by Loki empowered us to recognize and challenge existing obstacles and exclusions to move toward equity and inclusion.”

On the 26th of October we held two assemblies at the American International School of Utah (AISU) in Murray, UT. 1,000 middle school and high school students packed the auditorium all because one student reached out to us and asked if Joan was ever back in Utah if she could come to their school. So, we did. We called up the principal and made the arrangements. Nathan Justis, the head administrator said that one staff member said afterwards, “I heard two middle school students walking out saying that was the best assembly they had ever been to.” It doesn’t get much better than that. Our second assembly was a little smaller with 75 5th graders as Joan read “She Stood For Freedom” to them and answered awesome questions like, “What’s your favorite color.”

We concluded the month with a screening of “The Uncomfortable Truth” at Brigham Young University, Joan’s keynote address at the Salt Lake City NAACP Freedom

Banquet and then an appearance at the Utah Council for the Social Studies Annual Conference where we presented a 4th grade teacher, Jim Fearick of Jackson Elementary with the Joan Trumpauer Mulholland Teacher Award. 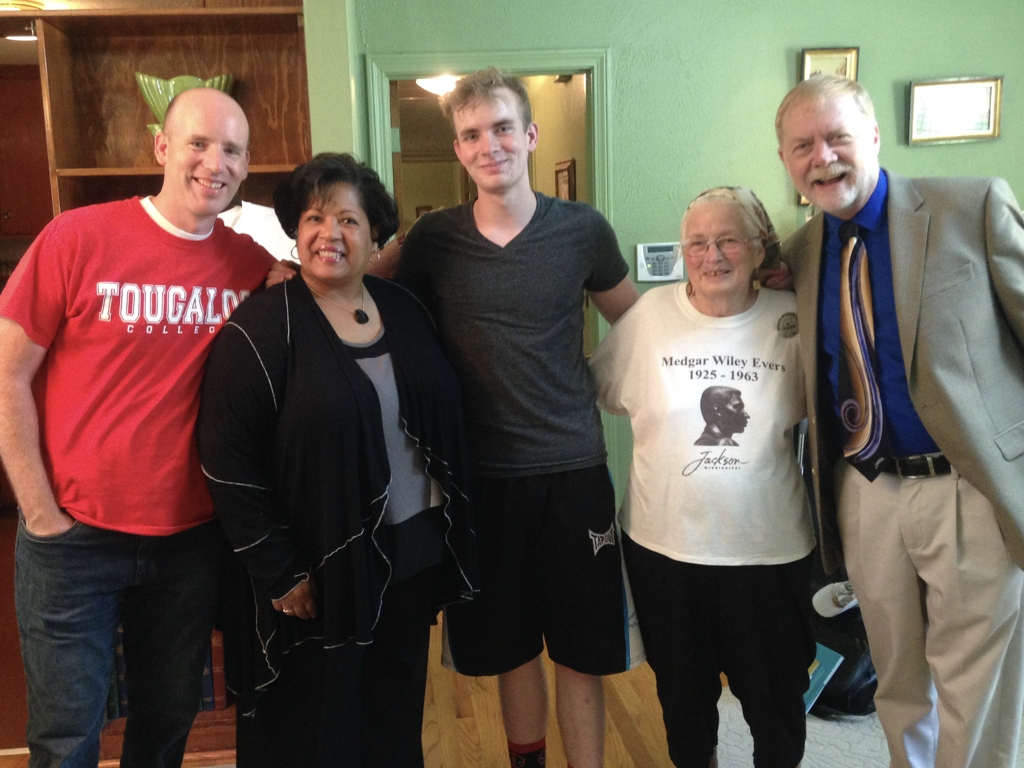 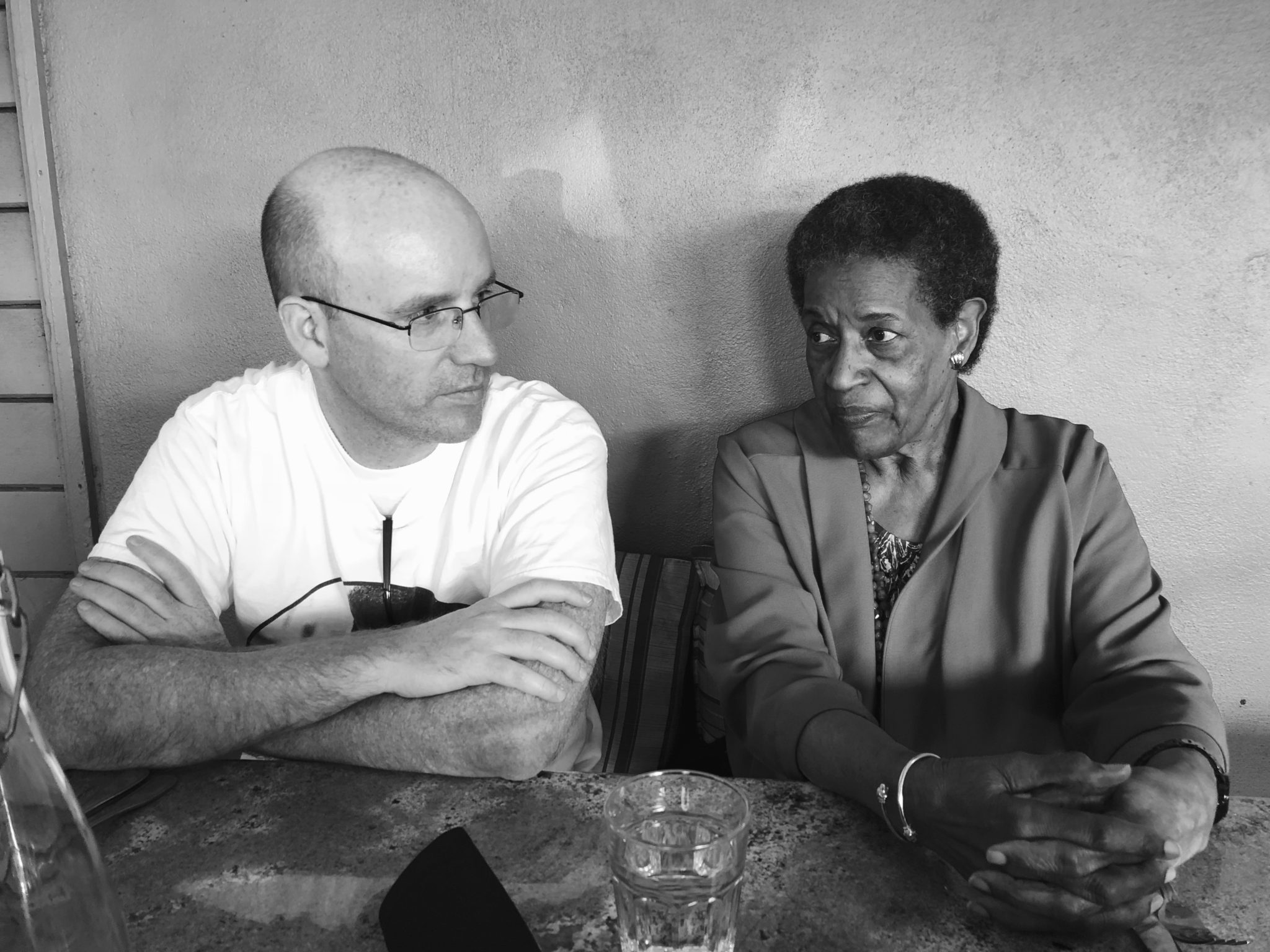