In 1927, over half a million people were displaced by the greatest flooding of the Mississippi River in recorded history, covering over 27,000 square miles in a part of Mississippi known as the Delta. To understand the scale of this disaster the area impacted was larger than Rhode Island, Delaware, Connecticut, Hawaii, New Jersey and Massachusetts combined and caused nearly a trillion dollars in damage in today’s dollars.

Many of the black sharecroppers escaped to the hills overlooking the Delta and kept on going all the way to Chicago leaving behind the racism that was particularly acute in that part of the region. Others weren’t so fortunate and with just the clothes on their backs and loved ones in their arms, they climbed onto the levees as the water rose higher and higher.

And then a strange thing happened. The white plantation owners jumped into action in what was seemingly a very heartfelt gesture. To the elation of those trapped on the levees, boats started arriving on this new sea. Those who had oppressed them and seen them as less than human just days before were now coming to their rescue. However, that joy quickly faded. The polite racists weren’t there to save them they merely wanted to keep them from escaping. They brought food, supplies and shelter but they didn’t free them from their new prison.

Today, we see plenty of examples of polite racism. They are the ones who would never think of burning a cross or using the n-word but don’t speak out against it when it happens. They, of course, even have a friend who is black but couldn’t tell you anything meaningful about them. If they say something offensive they don’t apologize. They defend themselves by saying, “That’s not what I meant”. And no matter how many times they something offensive it is never what they meant. Satisfied with their belief that they aren’t racist they make no additional effort to understand why it was offensive. The polite racist works twice as hard to convince others they aren’t racist but they continue to keep people of color on the levees. They mean well but they don’t do well and in the end, it’s about maintaining the status quo.

Nobody is born a racist. Society will take care of that. You don’t have to have parents goosestepping around the house in Nazi regalia and reading Mein Kampf or The Klansman to you to become a racist. The news, television, video games, friends and school will program you to think that way. Again, for the most part, they don’t openly say “super racist” things. It’s the jokes and statements amongst friends that go unchallenged, the disproportionate representation of the “criminal black man” in the media and the centering of whiteness in education.

Education has always been a great way to create the polite racist. The majority of educators are white women who, for the most part, were taught the same thing they teach. It must be right because who would teach kids something wrong. The cycle continues and continues. Any challenge to the narrative is seen as fringe and just angry voices. 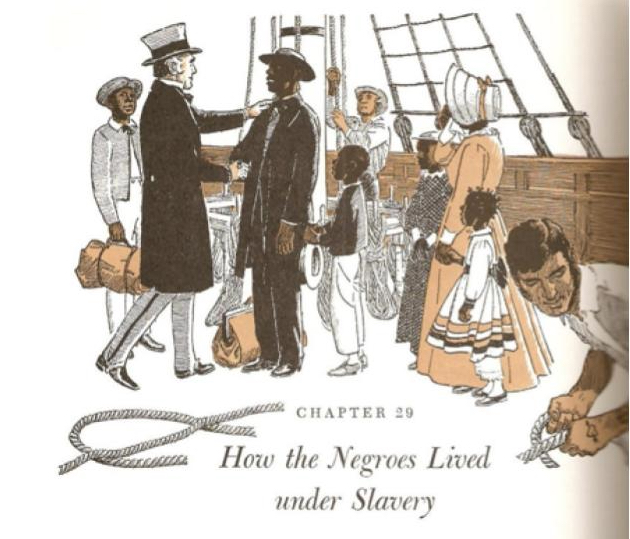 Sometimes it’s blatant, like the “happy slave narrative” in textbooks of old (and sometimes even new). One striking example that has proliferated around the internet is “Virginia: History, Government Geography”. It was used in the seventh grade with the chapter, “How the Negroes Lived Under Slavery.” This textbook was used until the early 1970s and is wrought with overtly racist screed:

“A feeling of strong affection existed between masters and slaves in a majority of Virginia homes . . . The house servants became almost as much a part of the planter’s family circle as its white members . . . The Negroes were always present at family weddings. They were allowed to look on at dances and other entertainments . . . A strong tie existed between slave and master because each was dependent on the other … The slave system demanded that the master care for the slave in childhood, in sickness, and in old age. The regard that master and slaves had for each other made plantation life happy and prosperous. Life among the Negroes of Virginia in slavery times was generally happy. The Negroes went about in a cheerful manner making a living for themselves and for those for whom they worked . . . But they were not worried by the furious arguments going on between Northerners and Southerners over what should be done with them. In fact, they paid little attention to these arguments.” 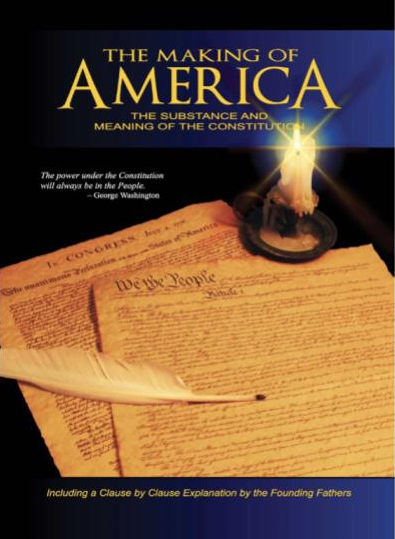 In more recent times there is “The Making of America: The Substance and Meaning of the Constitution” with the following text for students:

“if [black children] ran naked it was generally from choice, and when the white boys had to put on shoes and go away to school they were likely to envy the freedom of their colored playmates.”

Usually, it’s not as obvious and is much more subtle, something that can be brushed aside with the, “you’re-reading-to-much-into-it” defense. This argument is used to protect the individual from understanding why it was offensive because, in their eyes, they would never say something racist or offensive. Only ugly racist say those sorts of things. This is how polite racism is justified.

Another textbook displayed a map on immigration to America and equated the Atlantic Slave Trade with those immigrants who came from Europe between 1880 and 1920 and more recent immigrants from Mexico. Their text calls enslaved Africans, “workers”. On the surface, one could argue that those brought over in bondage against their will were technically immigrants (according to a very strict reading of the dictionary) but the realities of their lives are much different. In the shaping of a child’s mind, that difference is critical.

A recent textbook I came across focused on the ways geography and climate influenced how people lived and showed Africans as agrarian, tribal people still living in grass huts. While this may be true for some, the majority live in cities. To their credit, this was stated but if an image is worth a thousand words the pictures they used only focused on the grass hut motif.

The problem lies within the vocabulary 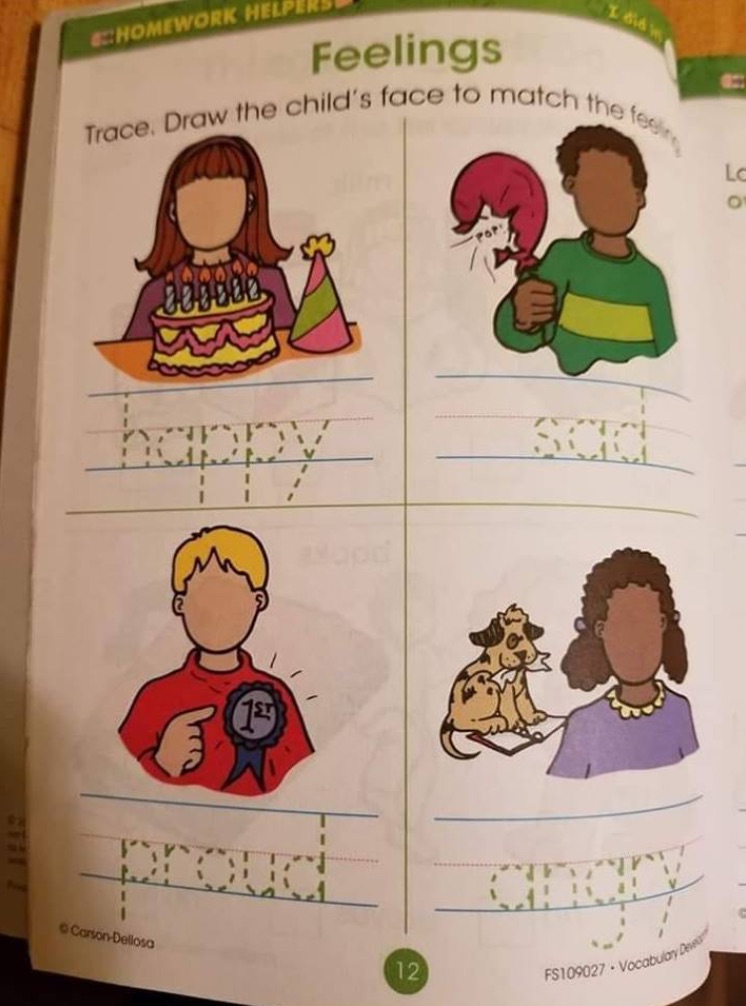 However, this insidious practice doesn’t need to be historical. It can be used in simple vocabulary lessons in early elementary. Word association is a powerful way for people to learn meaning. In this example, white children are seen as “happy” and “proud” while children of color are “sad” and “angry”. To the casual observer, this might not amount to much but racist/discriminatory attitudes aren’t formed by singular events they are cultivated over time through repetitive messaging. It’s racism by a thousand cuts. The defense of polite racism would simply be, “We were trying to show diversity.” And that’s nice but why is it only the children of color who are associated with “negative” words? The next counter-argument is that people of color are sad and angry too which comes back to the protective argument that one only sees racism where they want to see it.

The waters of the great Mississippi River subsided and life would go on as it always had. While one would hope the calamity would bring into sharp repose the treatment of African Americans in the South, it did not. The polite racists were lauded for their charity because that’s what we do. We applaud the giver even when they are the ones who created the problem in the first place and don’t care to understand why. And so the cycle of polite racism continues.

*Racism is a learned behavior. It’s not enough to teach our kids not to be racist. We must teach to be anti-racist. Through education, the future of racism and human rights can look different. We can empower our youth and make a difference. Set up your recurring monthly donation to the Joan Trumpauer Mulholland Foundation and help us get educational materials and curriculm into the hands of teachers and children. Click here for more details. 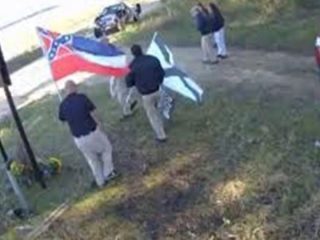 Previous Post (p) Emmett Till: They Stole His Life & His Story 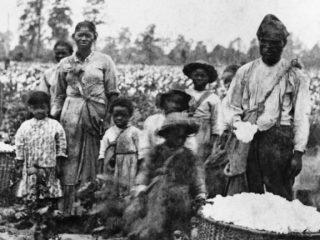