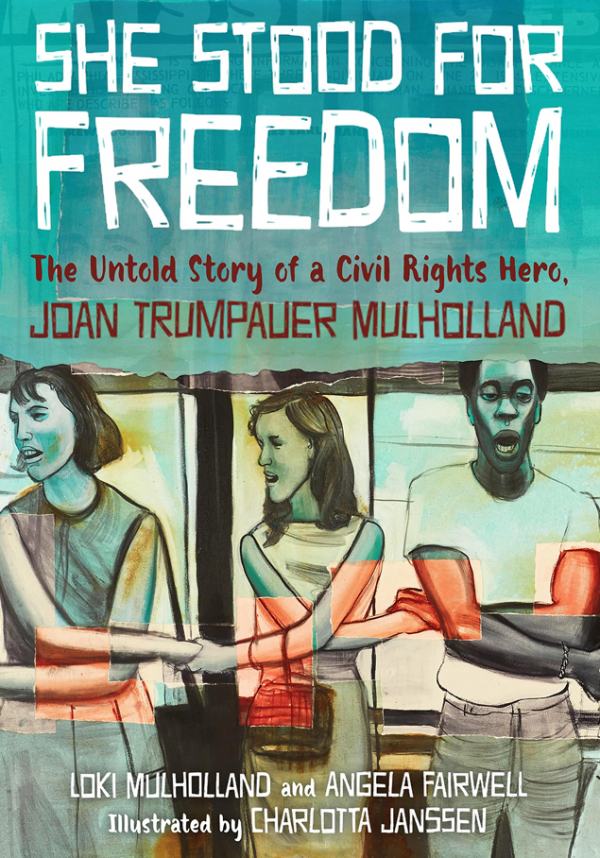 She Stood For Freedom – Book

The award-winning film on the life of Civil Rights Hero, Joan Trumpauer Mulholland, is now is children’s book form. The picture book edition describes in an age-appropriate way how the America of Joan’s youth was torn by racial injustice. Through carefully crafted storytelling and the collage artwork of Charlotta Janssen, young readers will come to understand the struggle during the tumultuous era of the 1960s Civil Rights Movement.

“She Stood for Freedom”, has been nominated for the 2017 Amelia Bloomer Award by the American Library Association

See what people are saying about this book:

“Janssen’s evocative mixed-media collages tap into the turbulence of the events discussed; aqua, rust, and drab greens provide the only color, melding with photographs, drawings, maps, newspaper headlines, diary entries, and official documents. The clear, direct narrative contextualizes Joan’s actions within the larger movement while explaining words like segregation for young audiences. A brief civil rights timeline is included, and a middle grade edition of the book (with the same title) is available simultaneously.”

“Mulholland’s courage and determination are stressed and explained in terms that young readers can understand. The colorful cut-paper-collage illustratons by Charlotta Janssen feature photographs and scenes that should be familiar to those studying the time period. Joan Trumpauer Mulholland is not a name that is familiar in children’s books; this is an excellent opportunity to correct an oversight.”

“Unheralded heroes walk among us-and in Loki Mulholland’s case, in his own family. His mother, Joan Trumpauer Mulholland, was an early civil rights activist who took Christian tenets to heart as a child. She was an anomaly when she first embraced the cause: young, white, female, and Southern, a combination that incensed the Ku Klux Klan, who placed her on a hit list. In 1960, at the age of 19, Mulholland started participating in lunch counter sit-ins, and through major events of the civil rights movement, she faced death countless times. This condensation of her son’s 2013 documentary, An Ordinary Hero, enhanced by Janssen’s evocative illustrations alongside shocking historic documents, is co-published with an edition for younger readers, both of which highlight Mulholland’s enduring message for children: ‘Find a problem, get some friends together, and go fix it.’”

“From the time she was a child, Mulholland, a white Southerner, came to understand the injustice of ‘separate but equal,’ motivating her to cross the Jim Crow line to stand with African Americans to demand equality. Her unwavering belief in equality gave her tremendous inner strength. Quotes from Mulholland portray her as someone who never thought of herself as a hero, only someone who could make a difference. Primary source documents and photos and other culturally relevant artifacts accompany the text. Collage-like illustrations [are] eye-catching and mood evoking…Purchase to supplement civil rights and biography materials.”

“A story of courage, of determination, of a desire for fairness, and of a desire for equality under the law. Perhaps the most compelling use of Joan’s own words is the answer that she still gives in response to the question of “Why did you do all of that?” Her response is a poem that she wrote called “Dialogue,” which includes the idea that Joan had done ‘nothing but acted like an American.’…Especially powerful way for the author to drive home a bigger point by presenting information and then letting the reader make up his or her own mind as to what inferences to make.”

“She Stood for Freedom tells the story of Joan Trumpauer Mulholland, an ardent, devoted fighter for the cause of equal justice. The desire she had to right the wrongs of her country took her from a college campus to downtown street demonstrations and then to jail. She truly deserves the descriptor “foot soldier” having lived the life of one while standing for freedom in the only way she knew she could. The book is a testament to both Joan and the many other unknown individuals who worked so hard to accomplish so much.”

“She Stood for Freedom will help young people understand that “ordinary” people, like Joan Trumpauer Mulholland, were as important to the successes gained during the Civil Rights Movement, as better known players like Rosa Parks and Dr. Martin Luther King, Jr. Her story also illustrates that you are never too young to do the right thing. This book will help young people better understand how they too can be heroes and “s-heroes” and stand up for justice and equality for all people.”

“This readable, fast-paced narrative illustrates why a young white woman would feel compelled to join the Civil Rights Movement of the 1960s. It was simple, actually: she was a Southerner, a Christian, an American and it was the right thing to do.”

“A wonderfully written book about a wonderful, worthy hero. An individual who I greatly admire.”

“It was my privilege to meet Joan Trumpauer Mulholland in 1961 when she was one of a dozen nonviolent, civil rights activists embarking on a risky, inter-racial bus ride from Washington, D.C. to the heart of the deep South. As a reporter, it was my role to follow their journey and let the world know what they encountered as they faced down a lawless system of racial injustice. Now, as then, I am humbled by their courage and the changes they brought about in our society. This well-written and beautifully illustrated book is one to be savored and shared with future generations who may need to look within themselves for similar courage.”

-Simeon Booker, award-winning journalist and author of Shocking the Conscience: A Reporter’s Account

“Martin Luther King, Jr. once said, “One day, the South will recognize its heroes. Joan Trumpauer Mulholland is one of those heroes. You cannot tell the story of America’s Civil Rights Movement without talking about the sit-ins, the Freedom Rides, the March on Washington, the 16th Street Baptist Church bombing, Freedom Summer, and the Selma to Montgomery march. How amazing in this book to tell all those stories through the life of one woman-Joan Trumpauer Mulholland, whose uncommon courage and unflinching perseverance continue to inspire us all.”

-Jerry Mitchell, winner of more than 20 national awards for his reporting on Civil Rights

There are no reviews yet.