Hanging on the wall in kitchen of Civil Rights Veteran, Joanne Blackmon Bland’s home is a calendar of President Obama. “Yeah, I like looking at that,” Joanne says in her weary but full voice. It’s a bit raspy at times, worn out from decades of fighting for her rights. She was eleven when she marched on the Edmund Pettus Bridge that Bloody Sunday over 52 years ago and she hasn’t let up since.

I first met Joanne a year ago when I interviewed her for Studies Weekly, an education-based company out of Utah. Joanne didn’t trust me. The distance between us was much greater than the small round kitchen table the we sat across as the camera crew scurried about. She didn’t want to do the interview but there we were. I reached into my pocket and pulled out my business card and handed it to her. I wanted to let her know that I wasn’t “one of them”. I have to do this a lot. The card has my mother’s mugshot from the Freedom Rides. I told her it was my mother. She changed, “I’ve seen this picture. My sister sent it to me… from a website.”

“She’s a Delta,” I said as I tried to seize onto her newfound enthusiasm. “Yes,” she exclaimed. I was okay in Joanne’s book.

The next time I would see Joanne was north of Salt Lake City, Utah when she came to speak at a high school. I was invited to attend. Afterwards, I approached her. She instantly recognized me, “What are you doing here?” I told her I lived in Utah. As we embraced for a warm grandmotherly hug I said to her, “I never thought I’d see you again.”

When I learned that I’d be passing through Selma again in October I called Joanne. She remembered me and said she’d be waiting. And so there we were, in her kitchen, in a city that time has practically forgotten in a part of the country where a lot of people don’t want you to forget.

I only had about an hour as I was heading west to Jackson, MS from Atlanta, GA. Our conversation was politically charged as we worked through what is happening in our country today. Joanne then dropped a bombshell on me, “You know they have that statue of Forrest in the cemetery. I showed you that last time. Didn’t I?”

“General Nathan Bedford Forrest of the Ku Klux Klan?!” I couldn’t believe what I was hearing. “No, you didn’t show me this but we’re going right now.” My one hour now became three. Yes, I worried about driving through Mississippi at night while wearing a Black Lives Matter t-shirt but I wasn’t missing this for anything.

The road leading to the Confederate Circle Monument is lined with the the majestic trees of the “Old” Live Oak Cemetery. Spanish moss drips ever downward from the branches that form a canopy that we drove underneath. A large pillar with a Confederate solider stands ever watchful. A section of CSA graves are just to the south and cannons point toward the north, “forever protecting the brave men who died for their cause,” the Selma and Dallas County Chamber of Commerce Tourism Division pamphlet reminds you.

There are “Confederate Flags” at various tombstones scattered through the cemetery. I noted to Joanne, “In Albany, they had the same thing. It was in clear view of the projects. It was like a daily reminder to those living there what their place is in America.” She motions to buildings on the other side of the low cemetery wall and across the street, “What do you think those are?”

I get out of the car. Joanne says she’s going to stay but then changes her mind. She looks at one of the markers designating an Unknown Soldier of the CSA, “I know one thing. He wasn’t black. That’s for sure.”

I almost didn’t see the monument to General Forrest but how could you miss it. It’s tacky in so many ways. Originally erected on the city museum grounds in 2000 it was moved after much protest to the cemetery at a spot that is conveniently owned by the United Daughters of the Confederacy and not the city. It’s inscription says it all, “Defender of Selma. Wizard of the Saddle. Untutored Genius. The First with the Most. This monument stands as a testament of our perpetual devotion and respect for Lt. General Nathan Bedford Forrest CSA 1821-1877. One of the South’s finest heroes. In honor of Gen. Forrest’s unwavering defense of Selma, the great state of Alabama and the Confederacy this memorial is dedicated.” And if you weren’t certain how they felt they add two more words at the end, “Deo Vindice” which translates to “With God as our defender.” This is the motto of the Confederate States of America.

I turned my attention back to the pillar with the solider which was erected in 1878. It’s sides were adorned with the names of the major generals and president of the Confederacy including Gen. Forrest (and yet the city still felt it needed a second monument just to the Klansman and Confederate General). Above his name it reads, “Dulce et decorum est pro patria mori.” It’s a line from Horace’s Odes and means, “It is sweet and proper to die for the fatherland. Two flags flew beside it. The Rebel Flag (the Northern Virginia Battle flag or “Stars and Bars”) was obvious to me and so was the second one. I turned to Joanne, “Do you know what flag that is?” She looked at for a moment. Almost as if on cue the wind picks up and unfurls it. I tell her, “It’s the Confederate Flag.”

I pulled my phone out of my back pocket, Googled it and showed Joanne the picture. She studied it and then looked back at the flag pole, “What the hell?”

She quickly directed me to take a picture while the wind was still blowing, “Send it to me.” There was now another battle that still needed to be fought.

“I got it.” I walked back over to her. She looked tired but Joanne always looks tired.

We’re both at a loss for words as we stared up at the flags. Finally I break the silence, “They really want to remind y’all that the

Confederacy is alive and well in Alabama.”

We headed back to the car. I opened the door for her, make sure she’s settled and close it. We slowly roll back under the Spanish moss.

Joanne admires the trees, “It’s a shame because this really is a beautiful cemetery.” She then shares one last story about the Gen. Forrest memorial, “Someone broke the head off of it a couple of years ago and when they replaced it they threatened to move the memorial over to the wall where the buildings are, make it taller and have lights on it at night so everyone can see it.” 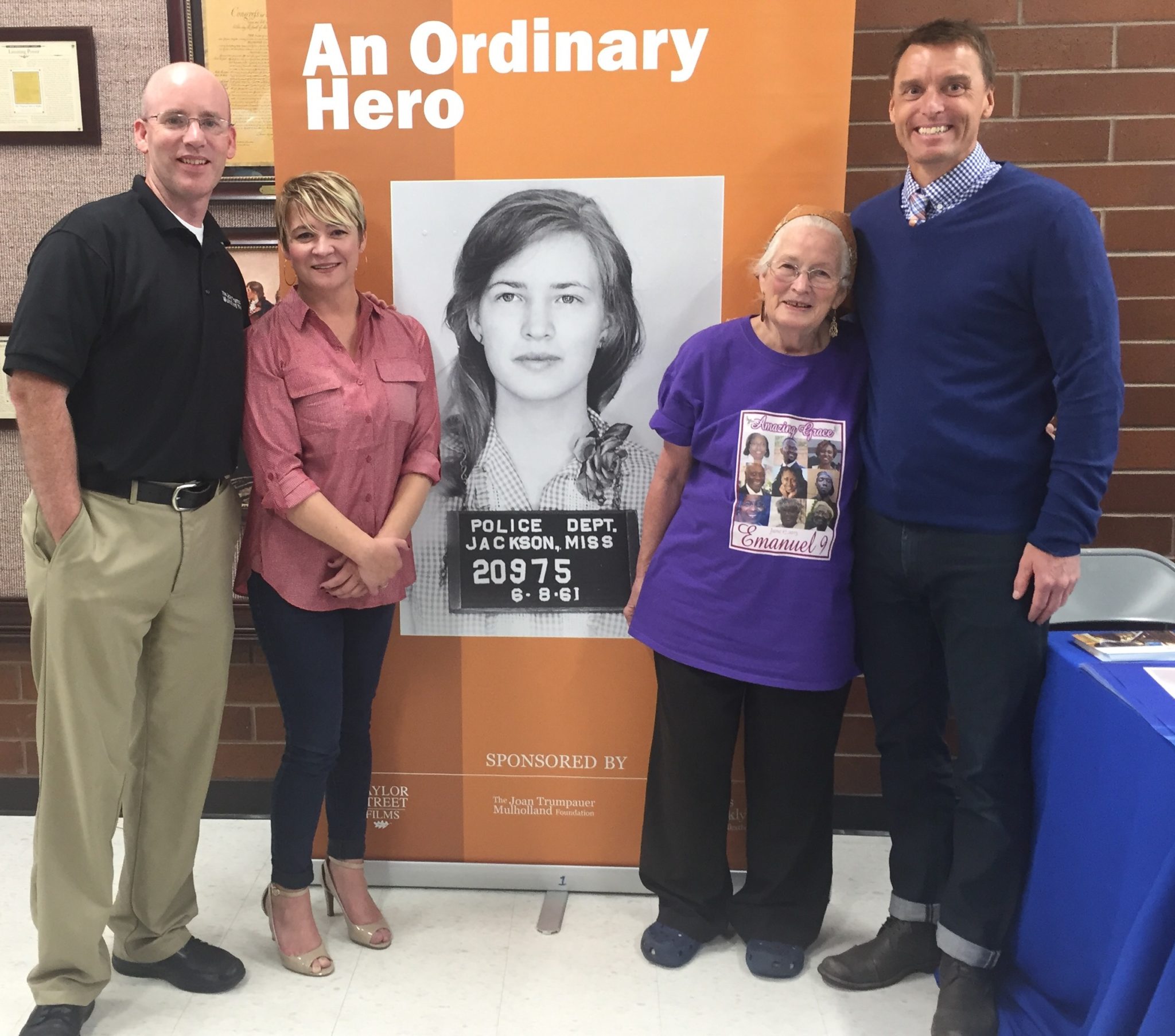